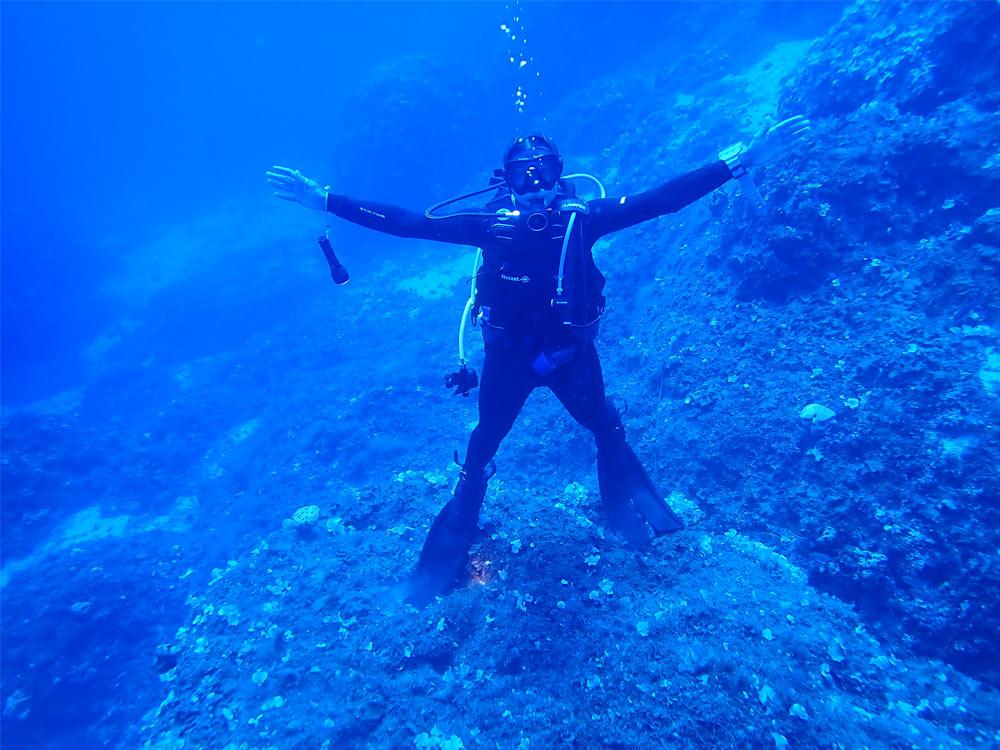 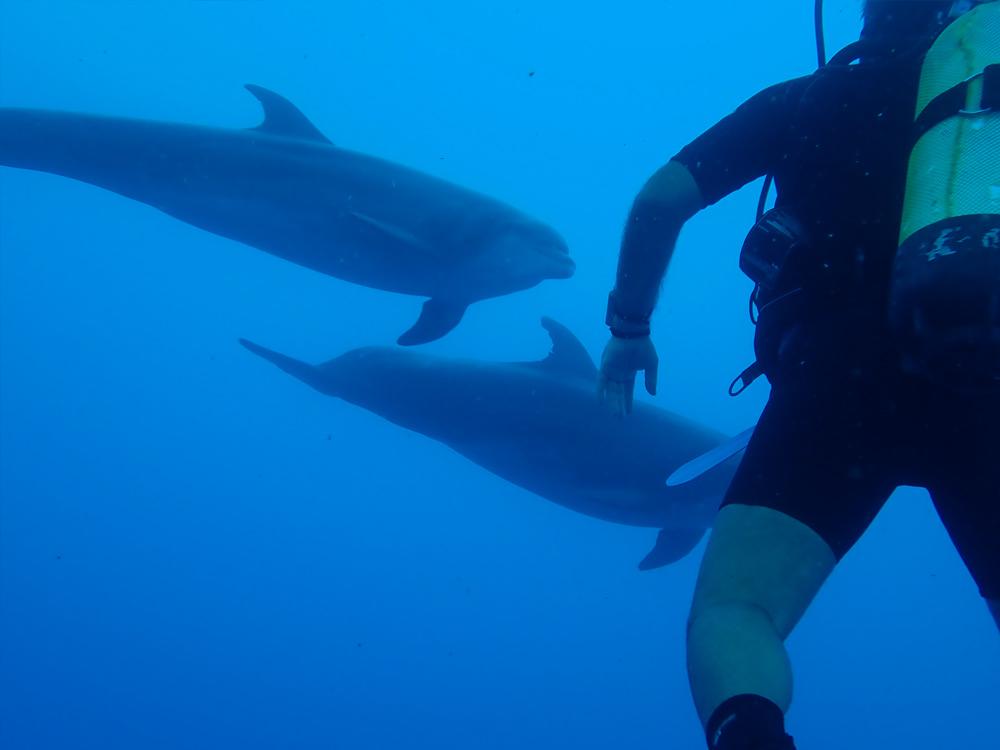 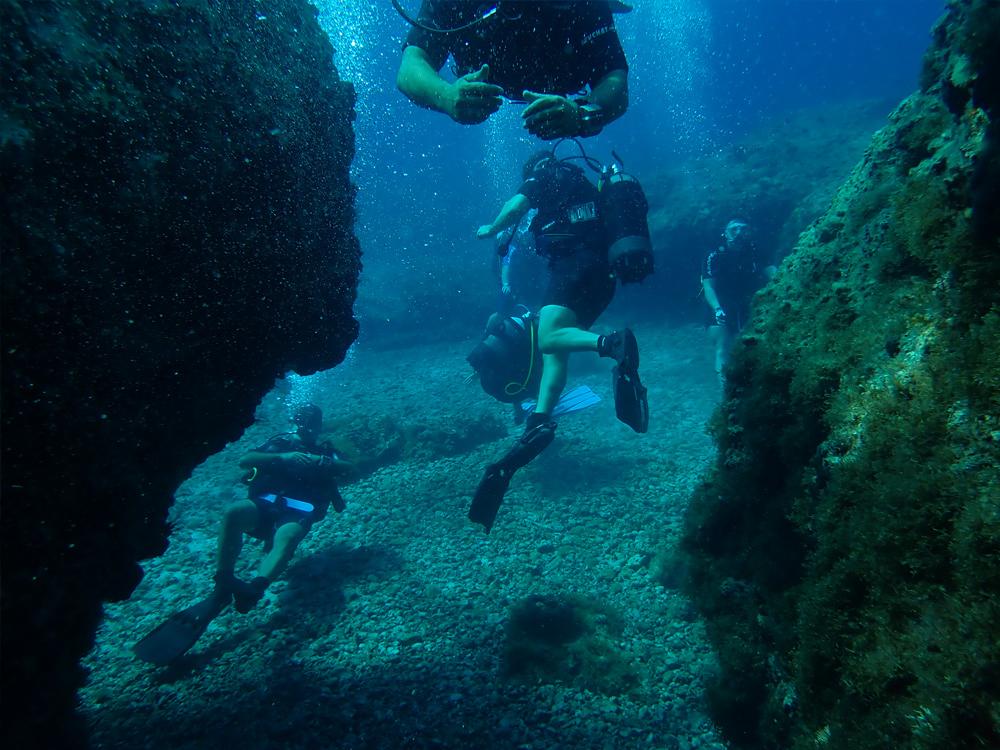 Feel the freedom.
Diving tourism is an activity included in the special alternative forms of tourism, in particular maritime tourism. It concerns a fairly large group of people consisting of tourists with a common interest, the exploration of the seabed. It is a particularly high-quality form of tourism because, according to surveys, it attracts mostly people with a higher level of education.
There is considerable wealth on the seabed in the marine area of the municipality of Ermionida, which is an object of exploration for amateur divers. The seabed of Ermionida is of considerable interest to lovers of the wet element who can witness the beauty of the underwater life beneath the beaches. With their scuba tanks and special equipment, they can dive and explore the underwater seabed with its living organisms and underwater geomorphology. Explore the sunken elements of our culture. Underwater tours of underwater attractions and special guided tours of underwater uniqueness ideal for diving enthusiasts which can be an attraction and at the same time enhance the effort to prolong n the tourist season as diving can be done here on a 12-month basis.

Scuba Diving
Discover Scuba Diving, are dives where people with no basic scuba training or certification can, under the guidance of a scuba diving instructor, make their first introduction to the wonderful world of the seabed. These dives are an opportunity for those interested to experience the pleasurable experience of scuba diving. Discover Scuba diving is the first step and about 75% of the people who attempted it either adopted diving as a separate hobby or developed it and turned their hobby into a profession. You can join us and we can dive together, adding to your personal book of experiences, indelible images of your first underwater journey 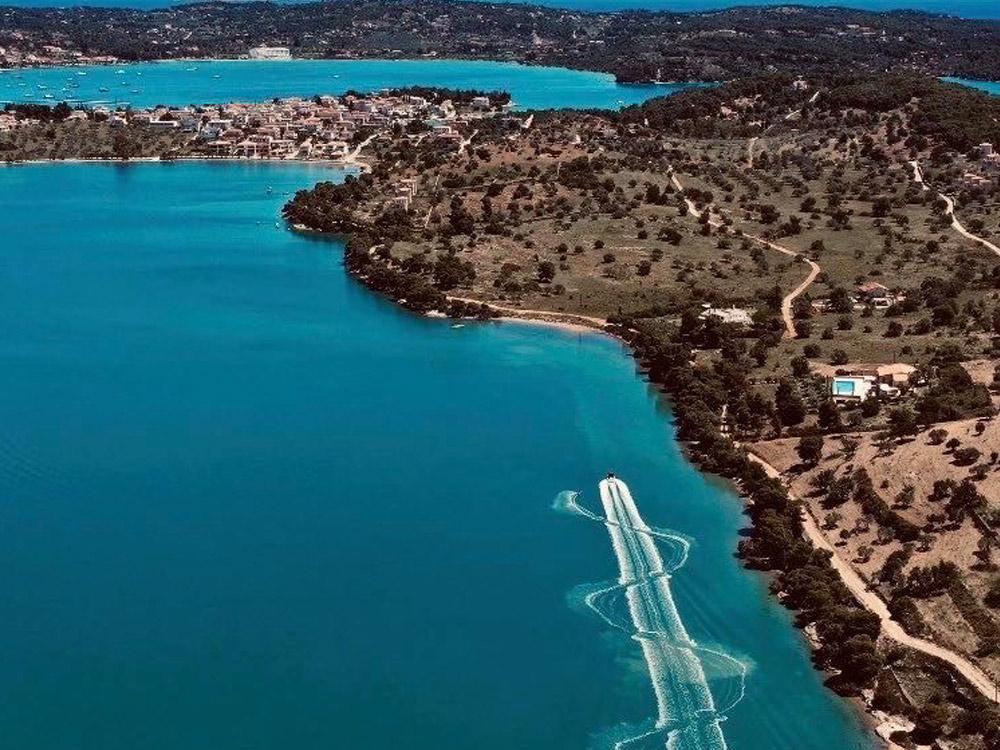 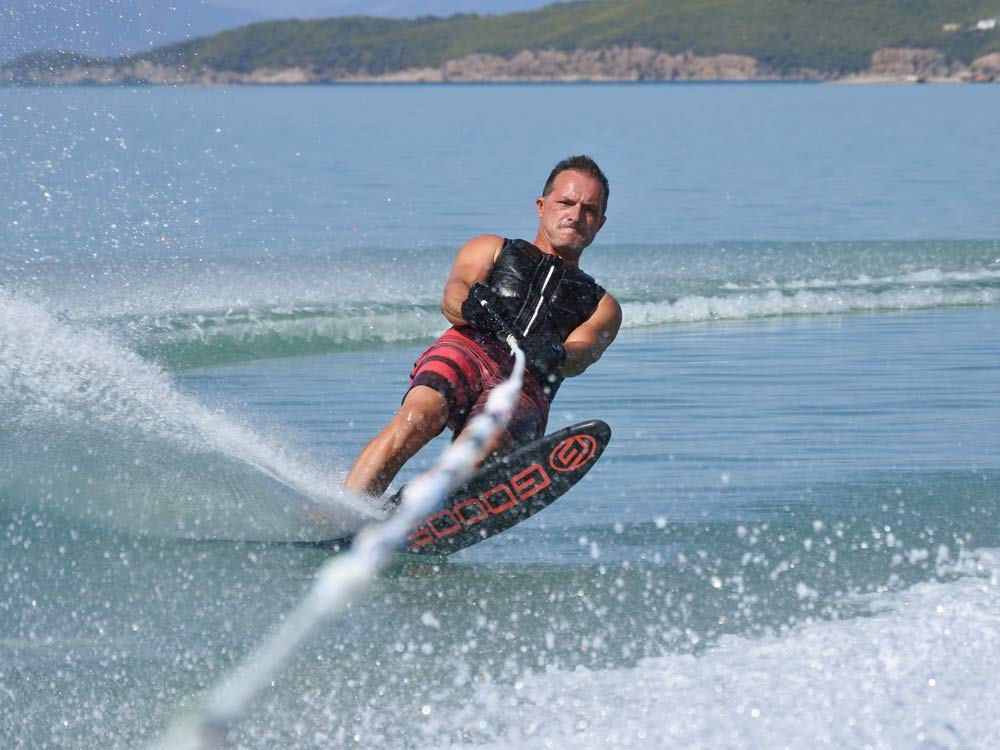 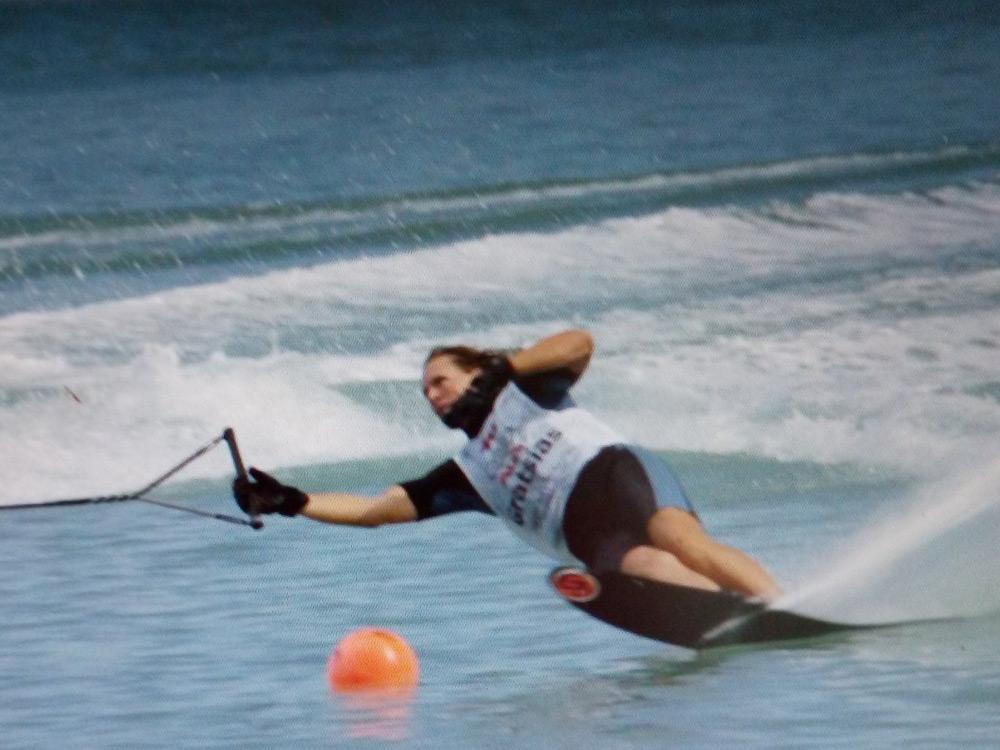 This is one of the most famous and oldest alternative tourism businesses in Ermionida, given that it has been operating since 1976. This special mention is made about the internationally renowned water ski school located in the beautiful lagoon of Ververoda in the enchanting Porto Cheli.
It was founded by the world-famous Greek coach Dimitris Kourounis together with his wife Patrikia, the well-known Greek water ski champion for many years (European Champion Seniors 2017).
In recent years, co-owner is also the Porto-Chelian and champion Dimitris Frantzis. In the high standard facilities of the school internationally renowned competitions, have been hosted for forty-six years with the participation of the elite of the sport around the world, while it is also a favorite destination for many well-known domestic and foreign high-standing businessmen who declare themselves as lovers of both water skiing and Ermionida.
The Ververoda Water Ski Center operates almost all year round daily from morning until the sunset, to serve skiers of all levels… 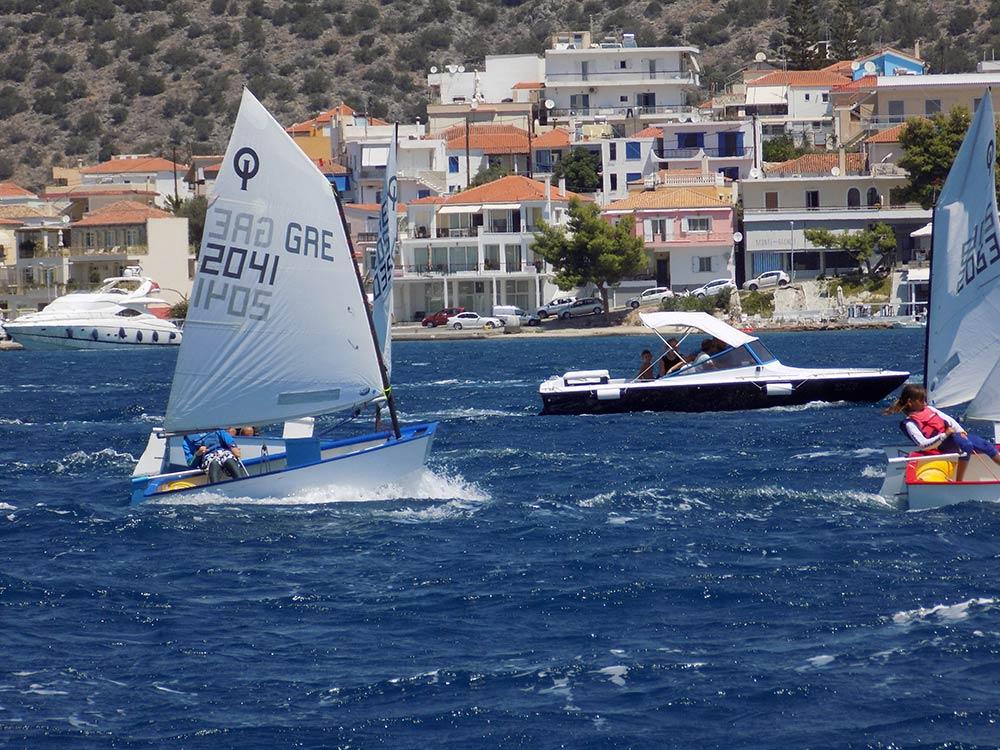 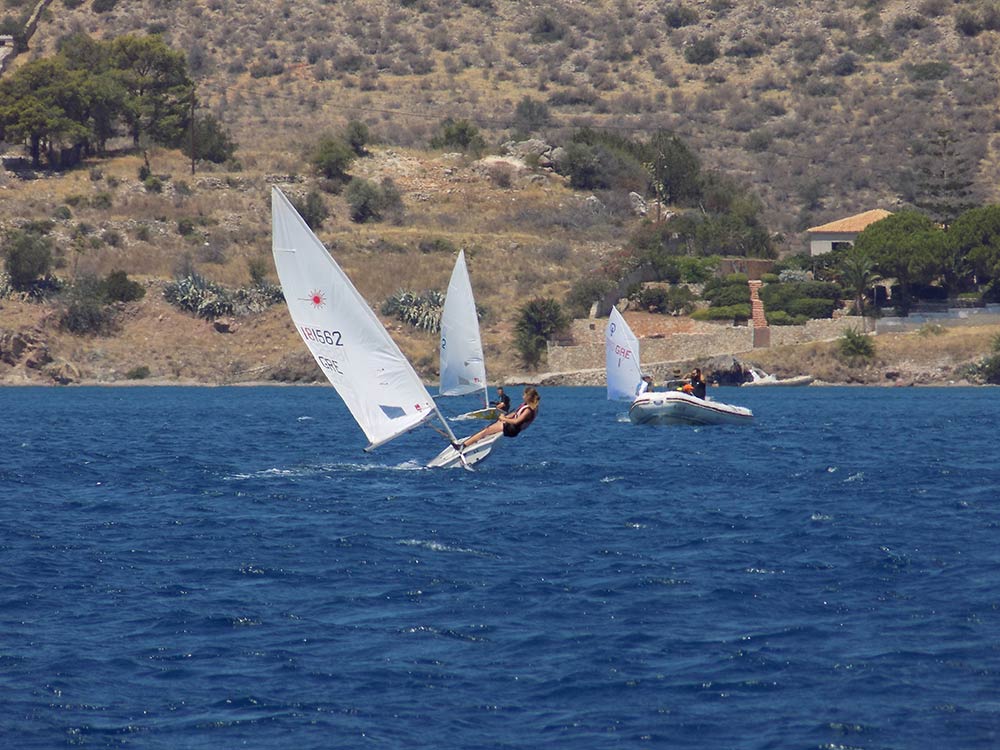 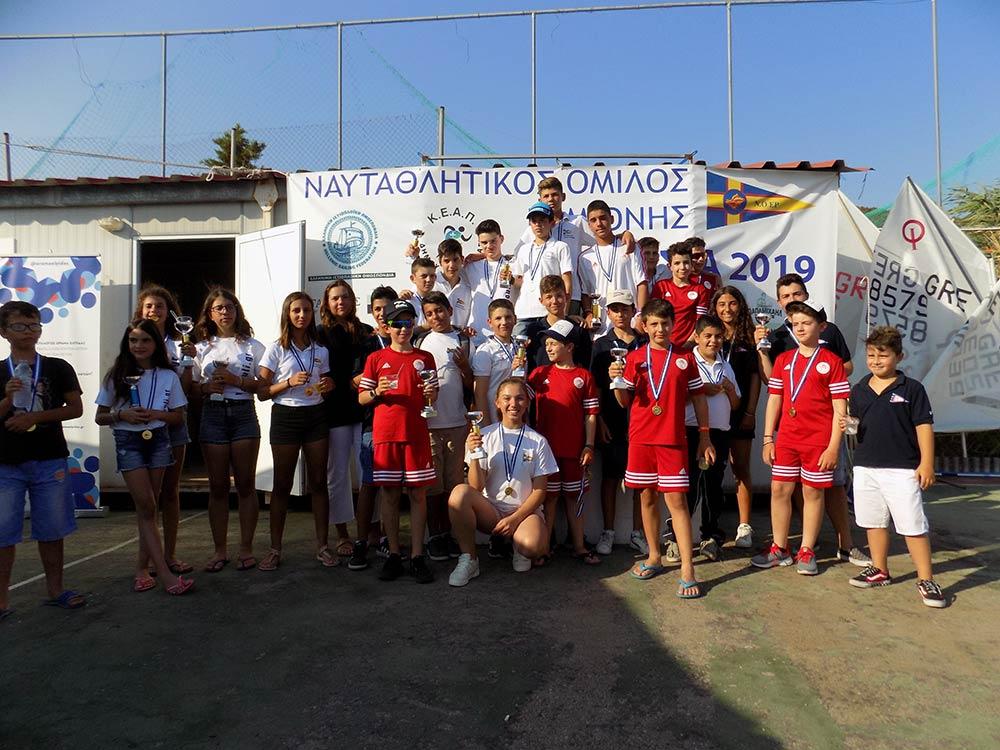 The Ermioni Sailing Club was founded in Ermioni, Argolis, with the aim of engaging the young people of the area in the sport of sailing.
Behind every sailing event are Ermionian families who, with vision, personal work and dedication and own resources, they have established the Club not only in the local community of Ermioni, but also nationwide achieving its recognition by the Greek Sailing Federation, receiving the Special Sports Recognition from the General Secretariat for Sports. This recognition, resulted in the assignment to the Yacht Club of Ermioni by the Hellenic Sailing Federation of two Panhellenic Sailing Cups, Optimist type, for children aged 7 to 11 years old for 2 consecutive years and a Panhellenic Sailing Championship, Optimist type, for children aged up to 15 years old. The races were held in Ermioni, the whole event was supported by our Club and was a complete success. 250 children participated in the races in the first year and 700 children in the second year, from all over Greece.

But apart from the championships, it is touching to see our sea filled with white sails from the boats of the children who learn the nautical art and the beauty of the sea, since, as we know, in the area where our Club is based, in the 2nd century B.C. (according to Pausanias) the most important and unique event in these years was the sailing and rowing competitions held in honour of “Dionysus Melanaigidos”. In fact, Pausanias mentions that these races were the only ones in Greece, and that is why Ermioni is considered the home of these games. Moreover, nautical sports can be combined with parallel cultural events and improve the qualitative characteristics of the place, thus enhancing its promotion. 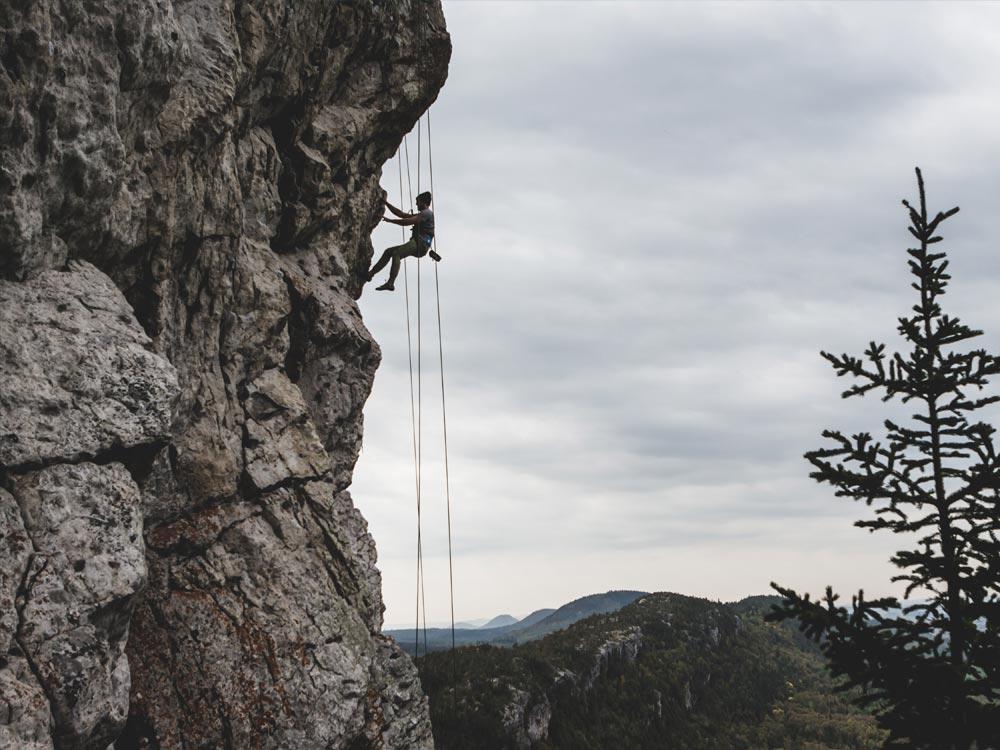 For climbing enthusiasts of all types, the area has ideal fields with beautiful landscapes.
The Venetian Castle of Thermisia, with a stunning view of the Argosaronic Gulf, is ideal for free or mountain climbing as it is accessible all year round due to the ideal weather conditions of the area.
The Katafyki Gorge, a favourite and well-known destination for sport lovers. On its route, which is full of pine trees, chaste trees and myrtles, you will also find an old picturesque, historic bridge. At the exit to Ermioni, there is the chapel of Saint Nikolas built in 1740, a preserved monument of the post-Byzantine period.
At the foot of Mount Didymo Argolis there is a unique geological phenomenon caused by subsidence. Two fields of unique beauty resembling volcanic craters, and in the smaller of them, 80 m deep, two churches have been carved. 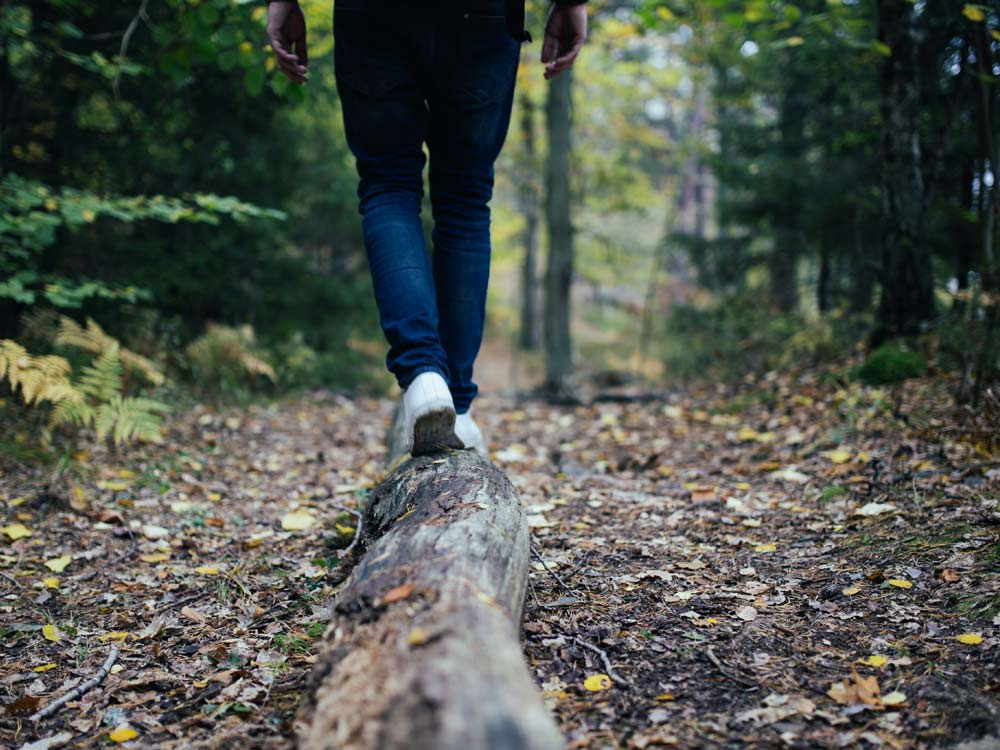 Circular route around 3 hours (can be combined with a picnic at Papoulia or lunch at the village of Fournoi).
See more

Circular route around 3 hours (can be combined with a picnic at Papoulia or lunch at the village of Fournoi).

3.Combination of the two previous routes

Circular route around 4-5 hours (can be combined with a picnic at Papoulia or lunch at the village of Fournoi).

20 minute journey from Fourni beach (can be combined with routes 1 and 3, just 10 minutes from Fournοi village by coach. A tour of the site can be organised by an experienced guide and also an underwater tour of the new findings in the outer area of the cave with sea masks).

Circular route around 3 hours. (There are a few uphill passages but with beautiful views of Ermioni and the surrounding area). (Can be combined with a visit to the monastery of Agioi Anargyroi and at the end of the route a visit to a traditional citrus orchard where visitors can pick fruit and drink fresh juice. A picnic or lunch can be organised in the courtyard of the orchard).

Circular route around at 2 hours and 30 minutes. (The route passes through the old town and crosses the whole coastal zone of Ermioni). (A visit to the folklore museum or the toy museum can be organized. A picnic can be arranged  in the Bisti forest, which is also an archaeological site, or a meal in a tavern in Ermioni).

Route around 4 hours. (+ 2 hours with crossing the river Selas, 6 hours with return from the village of Pelei).

Route around 3 hours round trip. (Can be combined with a picnic at the castle). 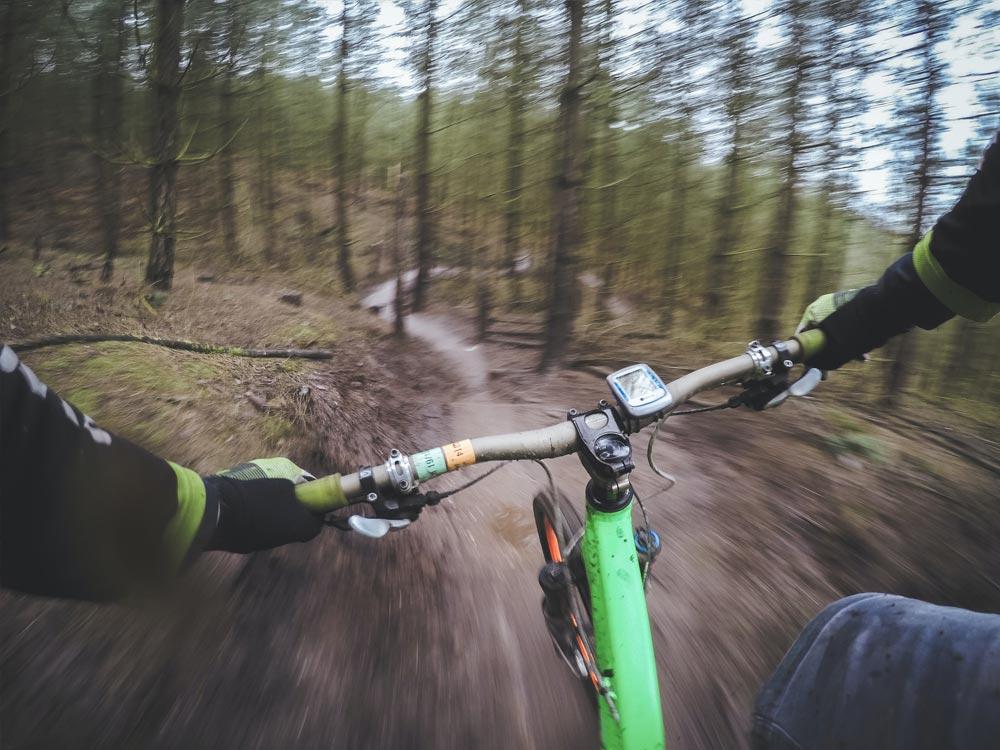 Visit to Spetses and tour of the island with a combination of swimming, food. 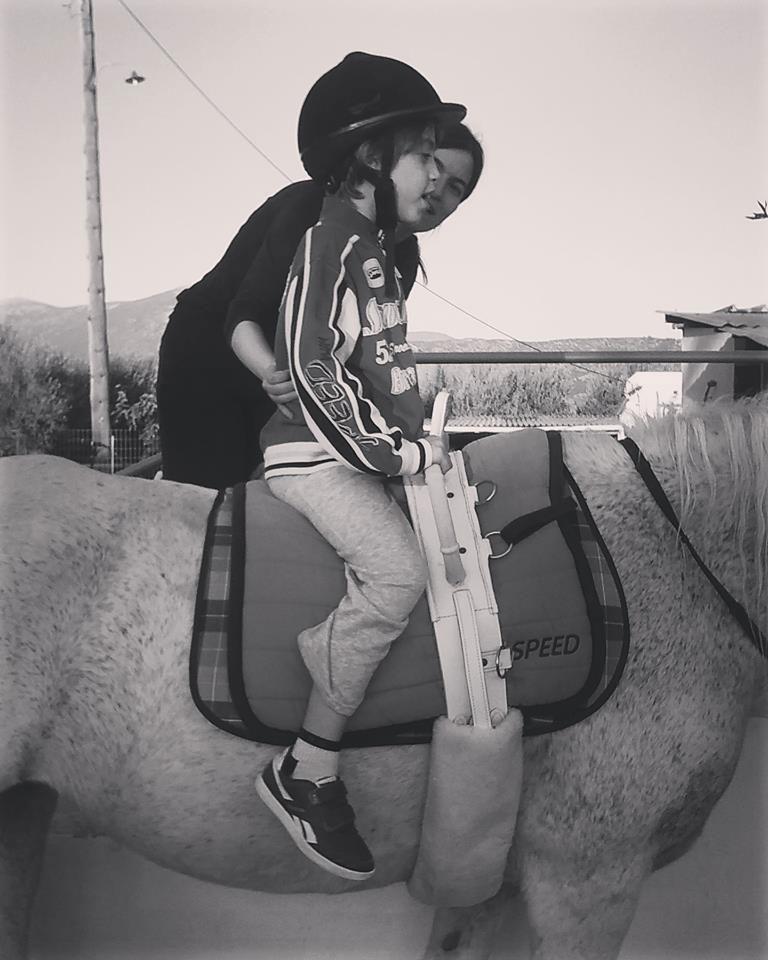 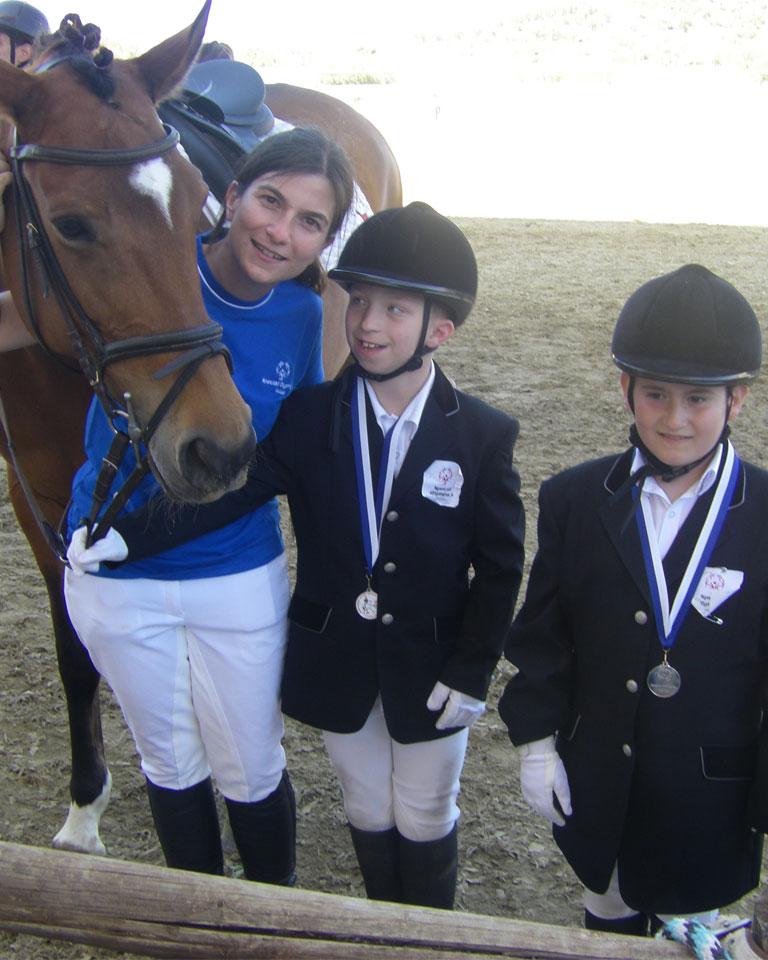 The Equestrian Sport Riding and Physical Rejuvenation therapy Center of Argolis Hippocrates, based in Kampos Valley, is a civil non-profit company founded in 2015 with its main object the treatment and sport, through equestrian activities, for people with physical, mental or emotional disabilities, children and adults , undertaking initiatives related to the defence of the rights of people with disabilities and in general of vulnerable groups and their families and raising public awareness on issues of social, cultural and environmental interest. 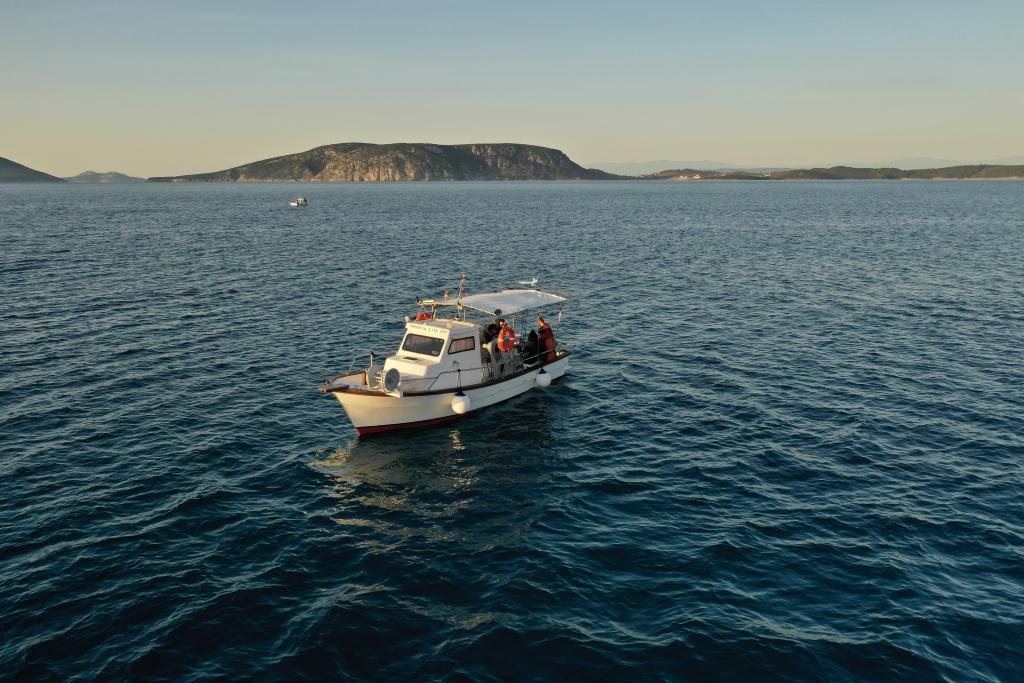 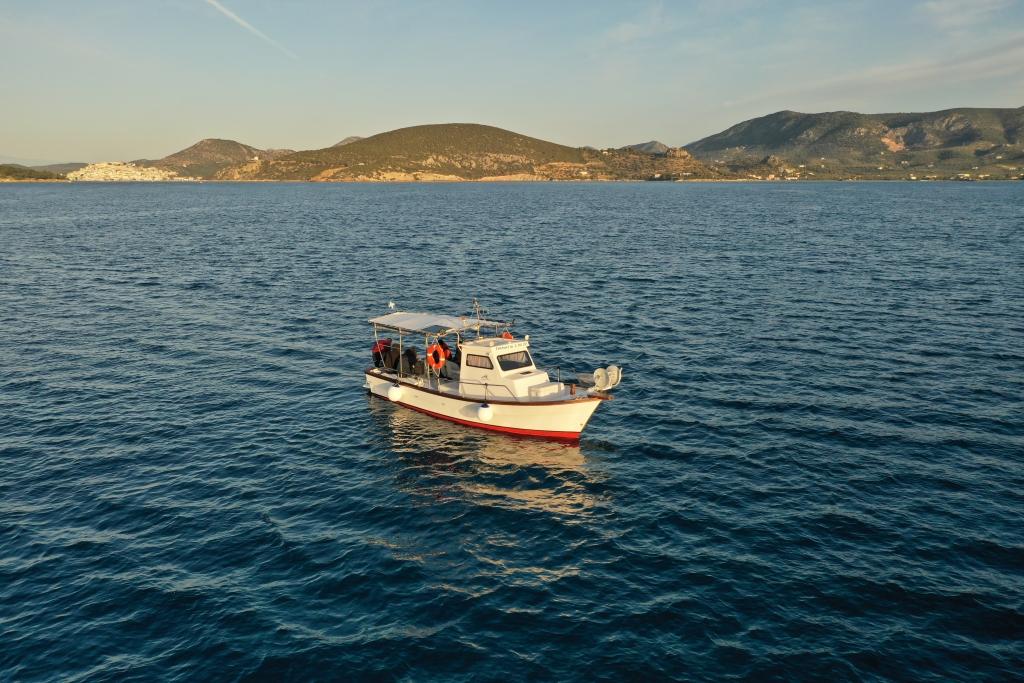 Angling Tourism is an alternative form of tourism, which gives the visitor or tourist of Ermionida the opportunity to enter a professional boat, either for recreation and demonstration of fishing techniques, or for fishing. It is an activity particularly widespread in many parts of the world.

Angling tourism represents to the maximum extent the Greek character. This activity combines everything that represents our country: sun, sea, genuine Greek gastronomy and the best hospitality! Ermionida is a wonderful place with many natural beauties some of which can only be visited by boat. During this alternative form of tourism, the visitor has a unique experience, fishing and swimming in the clear blue waters of Ermionida in deserted bays while having the opportunity to enjoy local gastronomy products during his meal.

The development of angling tourism in Ermionida helps to increase the promotion of fishermen and encourages the recognition and understanding of their complex sector of activity. It should not be forgotten that gastronomy in Ermionida is traditionally linked to fishery products and that traditional conservation and processing industries could be a key asset for tourism developed around the fishing industry.

Moreover, considering that pole-and-line fishing offers many social benefits and has a positive impact on health and well-being, we believe that it is more relevant than ever.