In Ermioni in 2007, the Cultural Committee of the Municipality of Ermioni started the revival of the custom with the fires and the hidden secrets of Klidonas The residents of Ermioni called this celebration “Saint John the Scrab”, since it was intertwined with the worship of fire and the miraculous power it had to cure scab They got infected from the animals they had in their yards.

. Many days before, children and adults would run to Bisti to gather dry branches, the carabousia as they were called or smoke daffodils, and anything else they could find that was flammable they gathered them and compete as to who could light the biggest fire outside their house. Everyone threw something related to their work into the fire. The fisherman would throw a piece of  anold net, the sailor a broken board from his boat, the farmer an olive branch and a ripe ear of cereal plant and the mistress of the house would throw the May wreath with the wish: “May they find immeasurable grace from the fire’s burning power.” 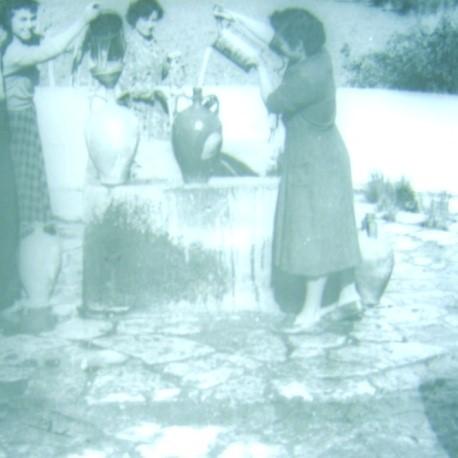 “Shin Yanni,  Psorese  that is how the residents of Ermioni used to call the fest.

Ermioni was sparkling from end –to end, from neighborhood to neighborhood and especially on the piers of Mandraki and the harbor, the fires created a fantastic and unique spectacle. Boys young and older, as well as men, jumped the fires and fell into the sea. When the celebration of this evening came to an end with the extinguishing of the fire, the girls would take the jugs and in the darkness they would go to the well to fill them with the “Silent water” and bring them home and empty it into a pitcher.  Then each one of them would secretly put inside them her personal object, a rizikari. Some would put a brooch, others an earring, a ring, or a key that would unlock their fortune with her wish and a good sign of the person with whom they wanted to spend their   lives with. They would cover the pitcher with a red cloth and each would return home and dream whatever her soul desired. The next day at noon they would all gather over the pitcher and waited anxiously for what the seven-year-old boy they had all chosen together would pick. The boy would put his right hand into the pitcher with the silent water and pull out the rizakari  that each  had put inside. Before he took it out to see to whom it belonged, each would say a quatrain specially created for the favors of love:

We open the Klidonas with the grace o St. John and whoever has a good faith, let him take it.

When the song finished he would open his handful and anyone could see to whom the rizakari belonged and whether it matched with her feelings. Finally, all the girls, after rinsing themselves with the silent  water that the little boy poured from the pitcher little by little into their handfuls,  they went to  their houses ,  and waited for the verification of the prophecy. All this takes place every summer on the 23rd June in the evening at the main port of Ermioni or at the port of Mantrakia, with the participation of many young children and young people of the area, under the sounds of traditional music and with a lot of dancing.

The event starts with the torchbearers who cross the narrow streets of Ermioni and end up at the harbour that has been chosen as the venue for the event. Then we have the representation of the old professions by the young children. Then the custom event follows and ends with the fire-jumping by children and adults. An important part of the evening is the participation of the dance section of the Municipal Community. The organization of the event is currently carried out by the Cultural Committee of the Municipal Community of Ermioni and is carried out with the financial support of the Legal Entity of Social Welfare – Solidarity – Education and Culture of the Municipality of Ermionida.