The Theatrical Club of Ermionida (T.C.E) is the successor of the old amateur theatre group that 30 years ago, in the period 1985-1992, sowed the first seed of theatrical culture in the region of Ermionida. It reappeared on the cultural map of Ermionida in 2009, with the theatrical play of A. Yalamas – K. Pretenderis “Mias Pendaras Niata (Threepeny Youth)” winning grand praise from the audience “.

The aim of the TCE is to engage in any form of artistic creation, but mainly the development of the theatre art , which is the main component of all arts. Its rich activity and the talent of its members have often attracted the spotlight and its good reputation goes beyond the boundaries of the prefecture of Argolis. In February 2018, it participated in the 2nd Panhellenic Amateur Theatre Festival in Heraklion, Crete, with F. García Lorca’s play “The House of Bernarda Alba”, winning three awards (audience best performance – committee best performance – costume design) and praise for the leading role.

2016 “The Peasants”, Assemblywomen (Ekkliasiazouses)” and “Golpho For Ever”

ORGANIZATION OF THE THEATRE FESTIVAL “PERFORMANCES IN ERMIONIDA”

Since 2104 and every summer the Theatre Club of Ermionida organizes the Theatre Festival “performances in Ermionida”, under the diligence and artistic guidance of its creator, Professor and Theatre Critic Mr. Kostas Georgousopoulos. Having now established itself as an institution, this leading cultural event brings together the best Athenian performances with the biggest names in Greek theatre within a month. At the same time, every summer, in the framework of the Theatre Festival “Interpretations in Ermionida”, the T.C.E. participates with a play of ancient drama, wanting to become actively involved with this genre and reap all the benefits of its involvement with it, both at the level of its members and at the level of the local and wider society. The aim of the Festival is to contribute to the promotion of theatre in the Greek region and specifically in the beautiful Ermionida, as well as to stimulate its already strong tourist development, promoting the fostering and dissemination of culture, offering an alternative entertainment proposal to the visitors of our area. 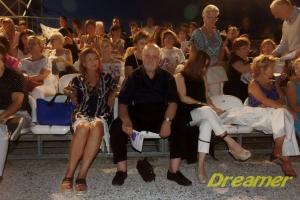 The creator of the festival “Performances in Ermionida”, Mr. Kostas Georgousopoulos and the Professor of International Law  at the University of Athens, Ms. Charitini Dipla, watch Sophocles’ “Antigone” directed by Aglaia Pappa, in the outdoor mobile amphitheatre in the Multi-purpose building  ARTiki.